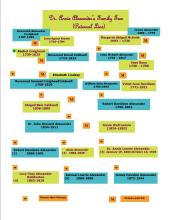 Book:
A Lifetime of Service: The Story of Dr. Annie Alexander

The 1880 census indicates Dr. and Mrs. Alexander lived with his mother, Abigail Alexander, their five children and two servants, one of whom had a child of her own.  According to tradition, Dr. Alexander witnessed first-hand the tragic and deadly results when a female patient was too embarrassed for him, a male doctor, to examine her. The story goes that Dr. Alexander believed that the only solution was to train women as physicians. This led him to encourage his daughter, Annie, to become a doctor, but only if she forsook any idea of marriage. However, when asked in later years about why she became a doctor, Annie simply said, “Papa chose for me.” In 1878, Dr. Alexander began preparing his daughter for medical school. He personally oversaw her studies and hired a private tutor to ensure her acceptance. He prepared Annie for a profession and a society that did not see woman as suitable or even mentally capable of becoming doctors. It is reported that a number of her relatives in Mecklenburg County became so upset with Annie’s decision that they ceased all contact with her.

Dr. John Brevard Alexander and Annie Wall Lowrie Alexander. On her father's side, Annie’s ancestors were some of the county’s most illustrious leaders during the American Revolution. They included the Reverend Alexander Craighead, the first settled minister in Mecklenburg County, and John McKnitt Alexander, a leader in the Committee of Safety and in the revolutionary government of Mecklenburg County." data-share-imageurl="">