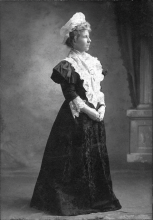 Book:
A Lifetime of Service: The Story of Dr. Annie Alexander

In her personal life, Annie Alexander was active in the Colonial Dames, the Mecklenburg Chapter of the Daughters of the American Revolution and the Stonewall Jackson Chapter of United Daughters of the Confederacy. Dr. Annie was an active member in First Presbyterian Church and even found time to teach Sunday School. The turn-of-the-twentieth-century below photograph shows the church from the point of view of Church Street. The path in the foreground is one that Annie Alexander would have walked when coming from her home. (1)

Her niece, Annie Lowrie Halliburton, recalled that Annie traveled abroad when it was uncommon for people in Charlotte to do so. In 1904, she took her mother to the St. Louis World Fair and even rode donkeys down into the Grand Canyon. Those close to her knew that she had "gentlemen callers and maintained correspondence with them, but she kept true to her promise to her father and never married." (2)

In October of 1929, Annie Alexander planned to take her adopted son, Robert Alexander, to a local fair. At the time, she had a pneumonia patient who had been under her care. In her typical fashion, Dr. Annie stayed with the patient with pneumonia. She made her way home on October 10th and asked her housekeeper, Ona Pope, to send for her niece. Dr. Annie realized that she herself had contracted pneumonia. Remembering that her lungs had been damaged by tuberculosis, she must have known that her prognosis was not good.  Unbeknownst to her, Robert had been taken from school to the hospital, where he was diagnosed with polio. For five days, both patients were in separate hospitals, neither one knowing of the other’s condition. It would take months before Robert Alexander recovered, but Annie, the only mother he had ever known, succumbed after five days of illness on October 15th. (3)  Her service was held at First Presbyterian Church. The Charlotte Observer ran a prominent news article on her passing as well as an editorial praising her contributions to the city. Numerous friends and family attended and mourned the loss of this woman who gave tirelessly for others.

"Dr. Annie" was buried in Elmwood Cemetery. In her will, made shortly before her death, it is clear that she was as smart in finances as she was medicine. All of her nieces, nephews, brothers, and son were well provided for and a trustee and guardian had been arranged for Robert’s care. In the year following her death, the 1930 census indicates Dr. Annie was right to entrust her son to the care of Ona Pope, her long-time housekeeper. She is listed as the owner of the house on 410 N. Tryon St., and Robert Alexander, 13, lived there as her ward. Among the lodgers is one Leora Perry, a woman whose profession is given as "Physician." Little is known about Dr. Perry, but it is nice to know there was still a doctor in the house.

Footnotes for this page.

Colonial Dames, the Mecklenburg Chapter of the Daughters of the American Revolution and the Stonewall Jackson Chapter of United Daughters of the Confederacy. Dr. Annie was an active member in First Presbyterian Church and even found time to teach Sunday School. The turn-of-the-twentieth-century below photograph shows the church from the point of view of Church Street." data-share-imageurl="">