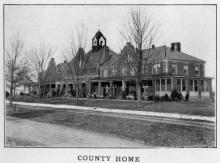 As the county’s population grew, the facility on Poor House Road became more and more inadequate. The local newspapers reported that its facilities were “inadequate and incomplete . . . especially [for] the sick and insane.” (Charlotte Daily Observer, June 5, 1901, p.6) The architectural firm of Hook and Sawyer was hired to build, it was said, “the best County Home in the state.” (Charlotte Daily Observer, October 7, 1903, p.5) The ornate, broad, two-story main building opened in 1904 far out of town on "the Salisbury Road" (US 29). Outbuildings supported the Home's farming and stock operations, as a map made in 1934 shows.

In 1969, W. T. Harris Boulevard would be extended and the building site became the northeast corner of North Tryon and Harris. A separate building on the grounds was also completed for inmates of color. (“New Colored Home Ready for Occupancy,” Charlotte Observer, February 10, 1907, p.6)

For the next fourteen years, the County Home stayed out of the news, but then in 1921 came a series of stories exposing the consequences of neglect. In May of 1921 the Mecklenburg County grand jury reported, and the newspapers reprinted, that previously noted deficiencies in the care of inmates at the County Home had gone unaddressed and made the need for improvements even more urgent. Citizens named to grand juries had broader responsibilities in the 1920s than just deciding whether to indict or not on a criminal case. They served as the eyes and ears of county government, inspecting the various institutions operated by the county and verifying that the will of the people was being effectively and efficiently carried out.

The summer of 1921 brought a flurry of attention to the County Home. “Numbers of energetic citizens have been visiting,” said a Charlotte Observer story. Reporting on changes to address criticisms the Observer noted that screens for windows and suitable beds had been ordered, implying that those articles had been in insufficient supply previously. Even while arguing that the County Commissioners had wrought “well-nigh a miracle” in their response to the problem, the reporter acknowledged ongoing problems: “In the colored department there is room for much improvement.” The worst conditions were found in the rooms of those whose reason for admittance was not poverty but mental agitation. As Dorothea Dix had pointed out in the previous century, being kept in a County Home made their condition worse. ("Urges County Home Changes” Charlotte Observer, May 22, 1921, p.9. See also June 19, p.4, and July 5, p.6, of that same year.)

As the county’s population grew, the facility on Poor House Road became more and more inadequate. The local newspapers reported that its facilities were “inadequate and incomplete . . . especially [for] the sick and insane.” (Charlotte Daily Observer, June 5, 1901, p." data-share-imageurl="">