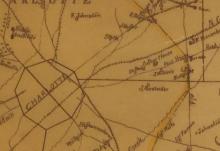 The announcement also stated that the Poor House would be located "2 1/2 miles east of Charlotte." If one considers "East" to be the direction of East Trade Street, then a line segment heading out 2 1/2 miles from the Square ends at a point just downstream of where Briar Creek crosses Monroe Road.

Mecklenburg County followed the models of "indoor relief" and "outdoor relief" simultaneously: It maintained a poor house, which in the census of 1850 (first page, second page) and of 1860 (first page, second page) showed no more than a half dozen residents, while at the same time authorizing direct payments to citizens on a case-by-case basis. In 1870, the Board of County Commissioners decided to regularize the system once and for all and to offer assistance only through the poor house.

Ordered by the Board that for the year 1870 this Board will not under any circumstances whatever order the payment of any claims which may be presented for any Services rendered to the Poor of for provisions furnished any one of them, not an inmate of the County Poor House.

It is further ordered that for and during the year 1870 no Person, not an inmate of the Poor House of the county will have disbursed to them any moneys to aid them in procuring supplies. And it is further ordered that all Persons making application for assistance, to this Board, be immediately sent to the County Poor House if in the opinion of the Board they be deemed proper subjects therefor. Provided nothing herein contained shall prevent any member of said Board from furnishing coffins and ordering the decent burial of the Poor at the expense of the County. (January 1, 1870)

The 1870 Census (first page, second page) showed 28 inmates, including, for the first time, eight African Americans. All of the inmates, which included four whole families, were identified as "Paupers."

Also in 1870, the Board authorized the construction of a new poor house east of Charlotte. A detail from an 1888 map of Mecklenburg County shows the “Poor House Road” running eastward away from town. The road ran parallel to the railroad, just south of it, following the path of the road later called The Plaza. The poor house itself is marked with a filled-in circle between the road and tracks. (Orr, 1888) In 1902 the County sold the site of the old Home to the Highland Park Manufacturing Company, which would erect a cotton mill on it.

The 1880 Census showed 26 inmates, nine of whom were African American. All the inmates were individual adults. Instead of being classified as "Paupers," they were labeled by physical or mental condition.

In theory, the county's turn towards "indoor relief" could have provided better care for less expense. In order to achieve this goal, the people of the county had to agree to view the destitute, decrepit, and distracted as everybody’s problem. Housing them separately, though, took them out of sight and made it easy to think of them as nobody’s problem. A popular nineteenth-century poem, “Over the Hill to the Poor-House,” about a widow whose children refused to care for her, captured the dread of the poor house as a place where people went to be forgotten. (Carleton, 1872) It was so well known that a headline in the Charlotte Daily Observer could use it in quotation marks without attribution: “They’ll Not Go ‘Over the Hill to the Poor House’,” (Dec. 10, 1893.)

In 1899, the State Board of Public Charities gave a report on "The Home" in Mecklenburg, noting the inspectors' general satisfaction with its operations.

In 1829 and again in 1830, the Mecklenburg County Court authorized citizens to buy land “for building a poor house” and then for constructing the structure itself. (Minutes, Book 7, p.327; Book 7, p.380) It opened in 1833, as this job announcment for a steward shows." data-share-imageurl="">