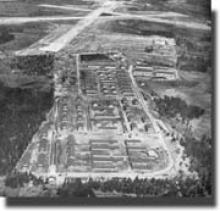 A History of Morris Field

When World War II started, the small airport Charlotteans formerly called Douglas Municipal Airport, was renamed the Charlotte Army Air Base. It had been taken over by the Army in April 1941, months before Pearl Harbor. It became a major part of the county’s war effort as well as the economic and social structure of the communities.

The airport was dedicated on April 21, 1941 by a number of dignitaries. N. C. Governor James M. Broughton introduced Fiorello H. La Guardia, Mayor of New York City. After viewing a mile long parade, which included the Central High School band that marched down West Trade Street in Charlotte, La Guardia told about 10,000 visitors to the Charlotte Air Base that “we are challenged by Adolf Hitler now.” This was a foreshadowing of what was to come for the base and its service men within the next eight months.

On January 22, 1942, the name of the airport was changed to Morris Field, in honor of the late Major William Colb Morris. Morris was born on August 4, 1891 in Harrisburg, NC and became a WW I veteran flier and instructor. He was at West Point when World War I broke out. Although he had originally served in the Canadian Air Force, he transferred to the United States Air Corp when America joined the war in 1917.

Morris served in France during the war and later wrote a book on training officers. He served at airfields in the Philippines, California, Virginia and Texas. He married Miss Maurine Garrett of Texas in 1923. After complications from surgery, he died in Dayton, Ohio in 1939. At the time of his death, he was a member of the staff of the Chief of Air Corps.

There was some dissension in Mecklenburg about naming their airfield after someone from another county. Many people in Charlotte wanted to name it after Second Lt. James S. Sykes, a fighter pilot from WW I who was killed on August 1, 1918 in France fighting the Germans. He was related to several prominent families in Charlotte. It was quite a surprise to all when the War Department announced that the field would be named after Morris, not Sykes.

The base was put on wartime restrictions of news so that news stories of military and non-military events had to be published with permission of the base intelligence officer. A fence was erected around the perimeter. The friendly, hometown airport had drastically changed.

Col. William B. Mayer came from Savannah to head up the training activities of troops at the Charlotte Army Air Base in August, 1941. Tent cities sprung up around the base as men began pouring into the area for field service and maneuver duty training.

Col. C. W. Howard, a veteran of WW I and a graduate of M.I.T. with a Doctor of Science degree, was Base Commander from March of 1941 until he was transferred to Knollwood, NC, between Southern Pines and Pinehurst, NC. Lt. Col. C. W. Howard became the acting commander until Col. Richard H. Ballard took his place in the summer of 1942. Major Roland Birnn was the executive officer under the command of Col. Howard.

Ballard had been a calvary officer in World War I. Col. Warner B. Gates was the Post Commander during the fall of 1942. During his time at Morris Field, a road was widened and paved with concrete between Dixie Road and Wilkinson Boulevard.

Some others who served at Morris Field were First Lt. Graham T. Stevens, who was the Fire Marshall and First Lieutenant John Duncan Muse, Assistant Post Exchange Officer. Capt. Elliott White Springs of Ft. Mill, South Carolina was a famous World War I fighter pilot who downed 11 enemy planes in combat over France. He gave up his palatial home and his daily responsibilities of running a large textile business in South Carolina to serve his country once more.

In the spring of 1941, Paul Wesley Bare, the son of a Methodist minister from Lancaster, Pennsylvania, served as Post Chaplain. Later in the spring of 1942, Lt. Russell G. Becktel, a minister of the United Brethren in Christ Church, and Lt. James A. Martin, a priest in the Catholic Church, joined Bare.

Capt. Paul L. Snyder was the Head Mess Officer. Lt. John Marshall was the Assistant Mess Officer. Mess Sgt. James Cochran also served. The mess hall had all the modern conveniences of the time and was very clean and inviting. The hall was divided into two sections with each holding 500 men. Initially officers ate with the enlisted men.

One of the groups that trained at the base was the 29th Air Base Group.

In order to “Keep ‘Em Flying,” crews worked around the clock in structures with black out cloths over the windows. Nine o’clock was “lights out” for the day crews. This constant shifting of day and night crews was done with precision in order to protect the workers and the security of their mission. Wounded veterans, mechanics and women repaired about 100 planes a month.

Citizens of Mecklenburg got used to the usual roar of planes overhead and soldiers everywhere. It became so routine that no one expected enemy planes to be flying above the county. The sirens, alert crews and those heavily armed guards at Morris Field were a sense of security to the population.

One of the women providing good health care to the soldiers at Morris Field was First Lt. Myrtle Wood, who replaced Lt. Mary Jo Miller. Miller had been at the hospital since its opening and was transferred to Virginia. Wood (shown in photo at left) understood the perils of military life. She had a brother stationed in Panama and another had been killed during flight training. She supervised six nurses, four who worked days in the wards, one nurse in the operating room and one nurse who did night duty.

To find out more about daily life at Morris Field, please click here to read issues of the base's newspaper, Morris Code.

The WPA bookmobile, run by traveling librarian, Mrs. Caroline Gregory, made rounds to the base, even before the war started, until a new library was established. According to a survey taken in 1941, the first choice of books were best-selling fiction, and the second most requested books were about travel. The more distant the land, the more popular the item! Some top choices were Amelia Earhart’s Last Flight and Rogers’ Flight Surgeon. As many as four books could be checked out at a time for a two weeks.

Another operation set up in advance of the war was the American Red Cross. Ernest F. Kausch was the director in charge in 1941. At Morris Field, the Red Cross located families and servicemen, made loans for personnel needing to travel for family problems and emergencies, encouraged communications between the military and their family, and helped find employment for the families of service personnel.

The federal government spent $6 million dollars to turn it into a pilot training base and keep it operational for five years before turning it back to local officials on May 14, 1946 . Some barracks and other structures were turned into apartments to help relieve the postwar housing shortage in the area.

The Charlotte Housing Authority built the Stonewall Jackson Homes, which today is located southeast of the airport and runways.

A chapel was dedicated on September 14, 1941. This nondenominational chapel, located on Airport Drive, now serves as a child development center.

When the airport was returned to the local people, it was renamed the Charlotte Municipal Airport. It is known today as the Charlotte/Douglas International Airport.