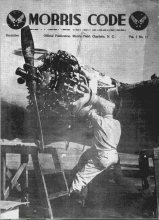 The official publication for the military and civilian personnel of Morris Field was called Morris Code. It covered base activities, general news about the movement of personnel in and out of the base, as well as cartoons, editorials, original poems, calendars of social activities, tallies of athletic competitions on base, jokes, photos and biographical information about officers that were coming to work at the base.

The enormous scope of the base in its influence over the lives of its inhabitants and the level of morale is definitely reflected in these issues. To learn more about Morris Field, read these issues of Morris Code. (The Morse code below the title of each Morris Code reads, "Keep 'em flying.")

The issues below are owned by the Carolina Historic Aviation Commission and Museum and the Robinson-Spangler Carolina Room and have been generously loaned to the Carolina Room of Charlotte Mecklenburg Library to be scanned for the exhibit.