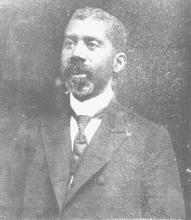 Dr. John Taylor Williams (1859-1924) was a prominent figure in the history of African-Americans in Charlotte. Not only was he one of the first three black doctors licensed in North Carolina, Williams also served an educator and a businessman.

Williams was born in 1859. He was the son of a free black man Peter Williams, who operated a successful lumber business in Cumberland County. His mother Ann McKay Williams began teaching him to read until the family moved to Harnett County in 1866. There, his father hired a white widow to teach the children in turn for his working her farm. In 1876, Williams entered the State Normal School (now Fayetteville State University) He graduated from there in 1880 and taught at a number of different schools. In 1882, he came to Charlotte and was among the faculty members who founded the first public school for black children, the Myers Street School. He taught there for three years.

In 1883, Williams entered Shaw University’s Leonard Medical School in Raleigh. In 1886, he returned to Charlotte and established a large practice and surgery. Besides medicine, Williams was a successful business man and real estate investor. From 1888-1892, Williams served as a City Alderman. President William McKinley appointed him to the position of Consul to Sierra Leone in 1898. Williams served in this capacity until 1907.