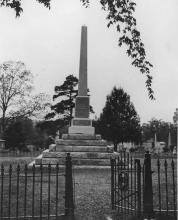 The Confederate Monument in Elmwood Cemetery was  erected on June 30, 1887 by the builders Berryhill & Johnson. The Ladies' Memorial Association rasied $995 for its construction. Members of the Association included Mary A. Osborne, C.M. Gibbons, Sue B. Watts, Bessie M. Watts, Carrie Wittkowsky, Jane Renwick Wilkes, and Laura Morrison Brown. In May, the association discovered it did not have funds. John Wilkes offerred to finish the work at his factory, The Mecklenburg Iron Works for half the cost.

The tall obelisk rests on a  granite plinth which sits on a two-tier granite base. A larger base of five granite steps forms the foundation for the structure.  A metal "cross pattee" (often called an "iron cross") is mounted on the wider 1st base, and its four arms are inscribed to honor the Confederate States of America, the Confederate Veteran, the United Daughters of the Confederacy, and the duration of the Confederacy from 1861 to 1865.

In front of the monument is a smaller bronze marker mounted on a short granite base is located several feet from the monument and commemorates the custodian of the monument, the Major Egbert A. Ross Camp 1423 of the Sons of Confederate Veterans, Charlotte, North Carolina.