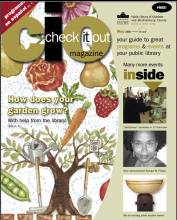 The Library as Destination

In the first decade of the 21st century, libraries faced competition from new media. The Charlotte Mecklenburg Library responded by making the case that a visit to a library was worth the effort. It offered more programs in house for audiences of all ages. With the publication of “CiO” or “Check it Out,” beginning in the year 2000, the library placed a new emphasis on programming in the libraries. This award-winning newsletter (CiO, June, 2002)CiO. June, 2002. n.p. informed readers of storytimes, book clubs, author visits, movie showings, musical performances, and more, all taking place at library branches. The variety of programming choices in the newsletter marketed the library as a place of experiences as well as a storehouse of information.

In the 1990s, the library had won itself a reputation as an innovator by offering internet access, but as access became cheaper and more ubiquitous, it had to improve its services in this area in order to add value. The 2000s saw the library pursue the goal of bridging the digital divide. All the libraries offered computers for word processing or for internet access, but Main Library redefined access by opening the “Virtual Village” in 2001. Director Cannon called it “an unparalleled public resource.” (CiO, July/August, 2001)CiO, July/August, 2001, n.p. , Charlotte Mecklenburg Library, August 22, 2001Charlotte Mecklenburg Library. “New Virtual Village at PLCMC Focuses on High-Tech Computer Technology for the Disabled,” Press Release, August 22, 2001. It featured the newest computers and special stations for music editing, video production, and photo manipulation.

Most notably, the Virtual Village offered assistive technologies to provide access to persons with visual impairments or limitations on movement. It also had classrooms for an expanded range of technology instruction. From the 1990s onward, the library had hosted classes in computer skills. In the 2000s, training became the responsibility of staff, who offered free classes regularly and had to maintain waiting lists for each session.

Running from 2001 to 2010 – contemporaneous with CiO – was another new wrinkle in library service: “Gallery L.” When the Virtual Village opened in a basement space, the first-floor quarters of the former computer lab became a permanent exhibit space. The renovation of this room brought it into compliance with the environmental and security standards of the Smithsonian Institution for travelling exhibitions. As a result, the Main Library began hosting high-quality, focused exhibits with materials originating in Washington, DC – free to the public. No wonder Gallery L was a readers’ choice favorite in Creative Loafing. The first exhibit – timed to coincide with Black History Month, 2001 – told the story of the Buffalo Soldiers. Others were more whimsical, like the “Graceful Envelope,” which displayed winners of a contest for the most beautiful hand-addressed envelope, or more family-oriented, like “Amusement Park Science,” with mini roller-coasters. The library used the periodic Gallery L exhibits to define programming themes for book groups, speakers, exhibits, etc. in the branches.