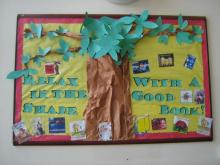 The branches define the library experience

The Charlotte Mecklenburg Library opened nine new buildings between 2000 and 2010.

Together, they showed the library’s ambitions for the system. Six of them were freestanding, architecturally striking facilities. Said Operations Director Rich Rosenthal,

Of the remaining three, Matthews and Freedom Regional occupied space in another agency’s building – the Matthews Town Hall and the Philip O. Berry High School. The last, CheckIt Outlet, was a return to the old storefront model of a library. It was located in rented space on “The Green,” a 1.5-acre park with literary-themed sculptures on South Tryon Street. It was small, but endeared itself to nearby office workers for its convenience and selection. (Its bestsellers were not subject to holds.)

The library showed its determination to grow with the county. Each new building provided a larger space for public service than the preceding branch in its area. The residents of the fast-growing Steele Creek community in southwestern Mecklenburg County worked particularly hard to win a library. They formed a library association that did not rest after its initial success in 1993. It launched a fundraising campaign for a new and larger library and raised $93,000, and has continued to support it since. (Charlotte Observer, December 7, 2003)"Their Years of Work Gave Steele Creek a Library." Charlotte Observer, December 7, 2003, p.3M), (SteelCreekResidents.org)"Steele Creek Residents Association, http://www.steelecreekresidents.org/Newspages/news819_Library.htm (accessed January 8, 2016)

Partnerships with other community organizations

Four branches represented a partnership between the library and another non-profit: Charlotte Mecklenburg Schools in the case of Freedom Regional, the Town Hall in Matthews, Mecklenburg County’s JobLink service and Sugar Creek, and the Children’s Theatre of Charlotte in the case of ImaginOn.

Preparations for a “Children’s Learning Center” uptown began as early as 1997. The buzz about it promised something special – a place where the latest computer resources could be used not just for finding and absorbing information but for creating it as well. “A plan to marry Charlotte-Mecklenburg’s main library with the city’s most vibrant child-centered arts group is earning a unanimous blessing from county leaders.”  (Charlotte Observer, August 30, 1999)Smith, Dean. "Stage Set for Kids' Library."Charlotte Observer, August 30, 1999, p.1A In 1999, the county’s voters approved a $27 million bond measure for its construction. It received another boost from Bank of America, which contributed $5 million to an endowment fund in the year 2000. The library recognized a senior vice president of the bank, Joseph B. Martin III, for his efforts on behalf of the arts and the disabled – he suffered from Lou Gehrig’s disease himself – along with his wife, Joan, by naming the facility “the Joe and Joan Martin Center.” A newly coined name for the facility – “ImaginOn” – was added in 2003. The Observer played with the name in an embarrassing headline before ImaginOn opened: “Imagine this: kids’ center $10 million over estimate,” (Charlotte Observer, March 6, 2005)Levine, Carrie. "Imagine This: Kids' Center $10 Million Over Estimate." Charlotte Observer, March 6, 2005, p.1A

The actual operation of this new, hybrid facility restored good feelings among members of the public, to the extent that they were troubled at all by delays, increased costs, and an initially unfamiliar name. The Children’s Theatre of Charlotte debuted in the new space with a spectacular, sold-out production of “The Lion, the Witch, and the Wardrobe,” and families flocked to the library’s part of the facility as well.

The library’s partnerships with other community organizations were singled out for praise in 2006, when the PLCMC, as it was known then, won the 2006 National Award for Museum and Library Service, given by the Institute for Library and Museum Services. The award is the nation's highest honor for public service provided by libraries and museums. The IMLS said this about Charlotte Mecklenburg Library: “The library achieved its pervasive reach through community partnerships, both large and small, that address changing community needs.” (IMLS 2006)Institute of Museum and Library Services, “National Awards for Museum and Library Service: 2006 Awards,” p.12, https://www.imls.gov/assets/1/AssetManager/2006awards.pdf (accessed January 8, 2016)