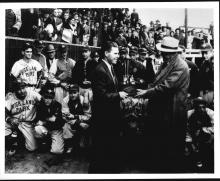 Luther Brackett began working at the Highland Mill Park #3 in 1934. He started as a trainee, but eventually became the General Manager of the mill until it closed in 1969. Brackett accepted, on behalf of the Highland Park baseball team, a trophy for placing second in the 1941 National Amateur World Series in Battle Creek, Michigan.

Back to Highland Park Mill: People on the Hill