The Family of Websites 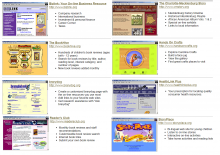 In the early 2000s, the Charlotte Mecklenburg Library called on communicators and designers to work with teams of staff members to create engaging, informative sites that were easy to use. “Readers Club” and the “The Charlotte-Mecklenburg Story” came online in 1997-1998, and within a few years the “the PLCMC family of websites” had formed. Several of these served children and their caregivers with suggested readings and activities. Others gathered together useful resources on specific topics – “Bizlink” for small business resources, “Healthlink Plus” for reliable medical information, “brarydog” for homework help.

All of these sites addressed questions that librarians had responded to most often in person. The librarians on the teams responsible for them gathered and organized the most helpful information. As such, these sites filled users’ needs by placing book reviews, business tips, and health advice from reliable sources at their fingertips, and the sites received favorable attention.* The evolution of the world wide web was so rapid, however, that these worthy ventures were soon overshadowed by commercial and social media sites that offered the most current information with more pizzazz. Of all the sites for adults created by the library, only “The Charlotte-Mecklenburg Story” survived. It served a niche market – persons interested in the history of the city of Charlotte the and county of Mecklenburg.

This discussion of programming and internet content has illustrated one of the library’s marketing phrases about the library from this period: “Books are only half the story.” Books and the face-to-face service they symbolized remained at least half the story, however.** As the library rethought its possibilities, people experienced new ways to enjoy reading and reference services that they already associated with the library

All of these efforts reflected a push to keep the library relevant, to show people that it could add value in the digital world as well as in the world of brick and mortar.

* Examples of awards include

** Books brought the library into the news when a patron, objecting to the presence of sexually explicit material on library shelves, read passages out loud at meetings of the County Commission. This one man was responsible for 95% of the complaints the Library received in 2000-2001. See John Woestendiek, “Dirty-Book Guy,” Charlotte Observer, March 4, 2001, p.1E