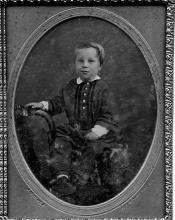 I recd the Tel. Dispatch this morning at 12 oclock with what unutterable joy you may imagine. Thank God that he has brought the precious mother safely through her trial and may he bless both father and mother and make their little treasure a blessing and comfort to them.  My heart yearns to be with you and to see this little pet. I recd your letters of 2nd & 3rd yesterday and was delighted with your rejoicing over the contents of box. How nice it is that it arrived in such good time. I shall wait most anxiously by for a letter with full account of the arrival of the boy. Renwick thinks it too bad that it is a boy, and both Oscar & Dolph say it must be called after them. The boys insisted on a bottle of Champagne for dinner in his honor. I dispatched Charlie right off to the Abbey & 13th St with the news & John just came in after we got the letter, so in a short time all most deeply interested knew it, but I must commence with my news for this has been a most eventful week and I have much to tell.

In the first place, it has been a bitter cold week. The first part of it was the coldest weather we have had this winter. Tuesday & Wednesday the Ther was nearly all day as low as 5 below zero. I have not been out all the week.  I have felt so much with my cold. Wednesday evg, a gentleman called on James who was not at home & appointed J. to call early next morning at Irving house. James was some time with him and is engaged as Superintendent of the Gas Works at Norwich, Connecticut at a salary of certainly 800 & perhaps 1000 dollars a year. He is all packed up and is to start tomorrow morning at 8 oclock. You may imagine how happy this has made James & me and with what mingled feelings I shall see him depart to a situation of such trust but the most prominent one, thankfulness and gratitude to God.

The boys 5 started for church this morning but Charlie & James returned being tired of waiting for a car, so that both were home when the Tel. Des. arrived.

Thursday, Agnes with the boys, John Jane & Vernon dined here. Neither Agnes nor I felt well all day so we lounged about on the sofas, grunted, growled at the cold, for the fires really seemed to give no heat, but with all this, we were all very happy, and every one rejoiced for dear James’s fair prospects.

It snowed three days and nights this week. The sleighing is excellent. Oscar is going with a sleighing party (Leavenworths, Gracies & Kings) on Monday night to Elizabeth town 15 miles. He pafsed a most triumphant examination with every one except McCulloh, who really tried to do as it was reported. He intended to “flunk the whole clafs.” He kept poor Oscar on the stage badgering him as some explained it for 35 minutes. Every one seems enraged at him. President, Professors, & boys and what an errant fool the man must be, when one certainly would suppose it for his own interest to prove he was a good teacher. It is not yet known how the clafs are to stand but every one says Oscar will certainly keep his place.

Fanny, C. (Charlie) & Anne W. were here a long visit this afternoon. They send you most loving and warm congratulations. One of the remarkable events of the week is that Kitty went out on Wednesday as usual, and went to Mrs. Beman’s and was married to Campbell the man who has been her beau since last spring. I have not spoken to her about it yet but must do so tomorrow. Poor Sarah is in great trouble about it. Kitty positively denies it to her but Sarah has been to Mr. Weston who married them and there is no doubt of it. Sarah says the man is 40 years old, has not a tooth in his head, and that he told here a few weeks he did not pofsefs ten dollars. He drives a brewer’s cart. Poor silly Kitty.

James has gone tonight to church with and to take leave of Mifs Wilkes & the Mortons. The other boys are downstairs with Vernon, Phil Lydig, Curtis & Chas. Bartlett. Uncle Henry is preaching at present at Winchester. Aunt G. & daughters are spending some days at Sing Sing. Poor little Charlie has a very severe attack of his (terms?) it lasted 3 days. Saturday 27th Sun. 28th U Mon. 29th

Aunt Margaret has a very bad cold and has not left her bed for 3 or 4 days. All the boys go up to see here in her room, John took his children. Jane, one nurse, Charlie S. & John A. out for a sleigh ride yesterday in one of Smith’s sleighs as far as 6 or 7 miles on the Bloomingdale Road. Axel & Cha. A. both had colds and could not go. My items of news are strung oddly enough together, but I hope you will able to get them right. It is getting late and I must stop. I hope dear Jack will write me a real nice gossiping letter & that you add a little with your own dear hand as soon as the Dr. gives you leave.

with oceans of love to you all believe me ever dearest Jeanie,

12th In the hurry of seeing James off dearest Jeanie I forgot to give Dolph your letter. He started in high spirits & the morning lovely, bright as am hopes__ Ellen K. & Sarah L have just been here_ and send love & congratulations _ Molly’s baby was born at 11 oclock Friday night. Ellen & I rejoiced together in the new arrivals on the same day.

•Richard S. McCulloh assumed the position formerly held by the now retired James Renwick as professor of chemistry and physics on April 3, 1854. (A History of Columbia, pgs. 127-129)

•Phil Lydig was the eldest son of Philip Mesier and Katherine Suydam Lydig. He graduated from Columbia Law School and entered the Army where he rose to the rank of Colonel.  (Historic Homes and Institutions and Genealogical and Family History of New York. Volume I. William S. Pelletreau. New York: Lewis Publishing Company, 1907, pgs. 400-403.

All letters maintain the original spelling, punctuation and grammar.

I recd the Tel. Dispatch this morning at 12 oclock with what unutterable joy you may imagine. Thank God that he has brought the precious mother safely through her trial and may he bless both father and mother and make their little treasure a blessing and comfort to them.  My heart yearns to be with you and to see this little pet. I recd your letters of 2nd & 3rd yesterday and was delighted with your rejoicing over the contents of box." data-share-imageurl="">