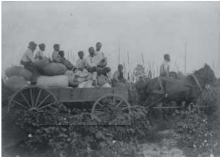 One of the most important agencies for maintaining cohesion and rendering social welfare was the church. In slavery, the church played a vital role in attending to the spiritual and social needs of slaves as well as aided in the successful escape of slaves to freedom. The institution of Jim Crow laws in the post Civil War era necessitated continuing the tradition of uplift and protest. Churches established or supported homes for the aged and for orphans in addition to organizing day nurseries, kindergartens, gymnasiums and social and literary clubs.

Another manifestation of the struggle against Jim Crow was the growth of benevolent societies, fraternal orders, sororities and auxiliaries devoted to helping African Americans. The primary purpose of these organizations was to provide support for the underprivileged. Like the churches, they contributed to encouraged attendance at libraries in addition to sponsoring dances and other social activities.

These organizations and the churches also supported Good Samaritan Hospital. It was one of the only health care facilities in the city and the region for African Americans. Located in the Third Ward community, the hospital was staffed by black doctors and had a nurses training school.

Education was another important aspect of black life. Myers Street Elementary opened in 1886 as the city's first black graded school. Second Ward High was the city's first black high school and operated from 1923 to 1969. In 1938, the second black high school, West Charlotte, opened its doors. Rural blacks were primarily educated at Rosenwald Schools. These schools were funded by northern philanthropist, Julius Rosenwald, and formerly Biddle Institute, organized in 1867, provided college training for blacks in Charlotte and in the region.

African Americans engaged in innumerable types of economic ventures. Many were employed as domestic and factory workers, teachers, and clerks. Others operated grocery stores, drugstores, restaurants, insurance companies, contractor companies, law firms, medical practices, theaters, and published newspapers. The success of these businesses were significant, for they employed and provided services for hundreds of blacks.

Many African Americans worked with organizations specifically pledged to work for the abolition of forced segregation, equitable education, and the enforcement of equal voting rights. In addition, they joined with other Americans in the battle for democracy abroad. Some fought and died in World War I and World War II while others participated in programs to conserve food and other essential commodities and in the purchase of thrift stamps and liberty bonds.

King Foster, born in Mecklenburg County in 1891, worked as a sharecropper until he moved, with his wife Mattie, to Long Island, NY in 1920. There he became a Pullman porter, working the Long Island to Miami run. DOROTHY NEAL CROCKETT.

This wonderful collection of pictorial history shows that from slavery to 1950, African Americans were an integral and vital part of Charlotte-Mecklenburg. It demonstrates the positive context of black responses to racism and in the process captures the beauty and the vigor that characterized black life until 1950. More importantly, this work contributes to our understanding of how African Americans shaped much of their own history separate from, yet a part of, life in Charlotte. Ultimately, this work is a portrayal of a proud people bound by their uniquely African, southern and American heritage.