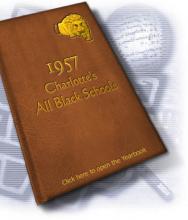 In 1957, four brave African American students crossed the color barrier to integrate Charlotte's city school system. These students chose to be reassigned from their all-black schools to all-white schools in order to get a better education. Their actions were the beginnings of a great change.

At that time, Mecklenburg County essentially had four school systems:

The white schools, both city and county, were better funded and equipped than the black schools.

In 1960, the voters of Mecklenburg County chose to consolidate the city and county school systems into one large Charlotte-Mecklenburg School System. This controversial and difficult task led to many changes and paved the way towards racial integration.

In 1968, court-ordered integration of the new school system began. Many students, both black and white, were bused to far-away schools to achieve integration.

What were these all-black schools like? Where were they? What happened to them?