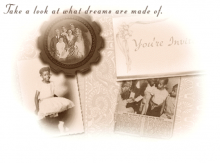 Below is an index to four image galleries of African American life in  Charlotte, North Carolina in the decades following World War II.

The recollections of Gerson Stroud and Daisy Spears Stroud are transcribed on each page and illustrated with photographs.

Every bridesmaid wore a strand of pearls for Elizabeth (“Libby”) and John Randolph’s wedding in 1950. Even the little flower girl wore a dress and necklace to match the bridal party." data-share-imageurl="">