Higher Education for Men in Charlotte 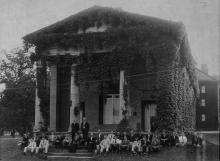 Educational opportunities for men were primarily designed to train them for a profession. In Charlotte, there are a number of business schools, including Charlotte Commercial College, Kings Business College, and the Wharton Normal and Industrial College. There are also two, four-year colleges near Charlotte, Biddle University and Davidson College. The North Carolina Medical College relocated to Charlotte  from Davidson College in 1907.

This photograph was taken on the campus of Davidson College, which is located north of Charlotte in the town of Davidson. Founded by the Presbyterian Church in 1835, Davidson College trained young men for the ministry in the beginning then later expanded the curriculum. At one time it even included a medical school. Davidson did not admit black male students until 1964. In 1972, the school voted to admit women.