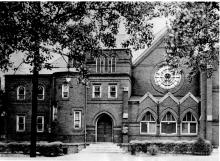 At one time, segregation-- either enforced or implied-- permeated every aspect of life in Charlotte, including in its churches. Prior to the Civil War, enslaved persons attended the First Baptist Church for whites. However, in 1867, two years after the Civil War,  the newly freedmen and women, sixty-six total,  no longer wanted to be forced to sit in the balcony of the white church. They  gathered under an oak tree on the grounds of the predominately white First Baptist Church of Charlotte to discuss their  future as a congregation. This led them to  request  letters to form their own church. In June of 1867, the First Baptist Church (for Blacks) was  formally organized. The church first met in the Union occupied Hospital near the site of the present YMCA on Morehead Street. In 1870, the congregation purchased a plot of land at 1020 South Church Street. It took decades to raise the funds, but by 1901, construction began on the church.  Most, if not all, of the work was performed by the men of the church, who were skilled carpenters, brick masons, plumbers and electricians. They worked at night after leaving their day jobs. The women and children of the church supported their men by bringing food and holding lanterns for the workers.  Ten years later, the church was finally completed and was formally dedicated September 17-23, 1911. It quickly became the center of activity in Third Ward community. First Baptist remained at the South Church Street location until sadly, it fell victim to urban renewal and was razed during the 1970's. The congregation relocated to its present location at 1801 Oaklawn Avenue and dedication services were held in May 1977.