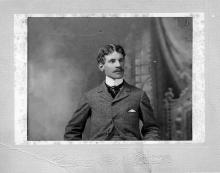 Readman first appears in the Charlotte directory around 1899. ( 1) Born in New York in April of 1851, his father was from England and his mother was a New Yorker.  Readman dabbled in the theatrical business and worked in newspapers in California. He arrived in Charlotte in 1896. (2) Readman’s studio was located at 18 South Tryon Street, and he lived in a boarding house on 3rd Street. (3) By 1902, his wife, Emily, joined him, and they lived at 237 South Tryon Street, which was just a few blocks down from Readman’s Studio that was now located at 27 South Tryon Street. (4)   John Readman died suddenly  on October 2, 1903. According to his obituary, he was well thought of and active in the Masons.  After a local service here in Charlotte, Readman's fellow Masons escorted his wife Emily to New York City for the burial. (5)