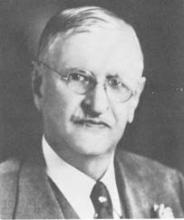 The Belk family moved from Lancaster, S.C., to Monroe, N.C. in 1873. Without money to attend college, William Henry Belk (1862-1952) went to work at age 14 in a local store for $5 per month. He learned on the job and saved what he could of his earnings. By 1888 he had saved $750 and opened his own store in Monroe. His brother, Dr. John Montgomery Belk, joined the family business three years later. Their advertising claimed that their store offered customers the lowest possible prices.In 1895 the store they opened in Charlotte bore the name Belk Brothers. The two partners worked together until Dr. Belk died in 1928.W. H. Belk married Mary Leona Irwin and they had six children. Belk is buried in Charlotte's Elmwood Cemetery.Today there are more than 400 Belk stores throughout the Southeast.