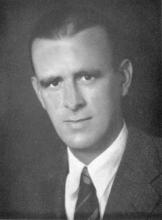 William Barnhardt (February 3, 1903 - April 25, 1985) was a Charlotte manufacturer and owner of a number of internationally known textile product enterprises. In addition to his prominence as a Charlotte business leader, he is remembered as a generous philanthropist. Many of his gifts have continued to benefit Charlotte's Queen's University and a number of other civic and religious organizations. One of William Barnhardt's notable contributions was his gift to Queen's College of the Barnhardt home and a four acre tract in Myers Park. Another of his contributions was his generous bequest to Foundation for the Carolinas who administered his giving to several charitable organizations.