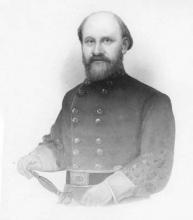 Born in Cabarrus County the ninth of ten children, Barringer (1825-1895) was an 1842 graduate of the University of North Carolina. From 1848-50, he represented his home county in the House of Commons. (House of Representatives, North Carolina General Assembly)

When North Carolina seceded from the Union at the start of the Civil War, Barringer eagerly volunteered for military service. In 1861, he was made captain of Company F, 1st North Carolina Cavalry. Promoted to major, then lieutenant colonel, by 1864 he was commissioned brigadier general and took over several regiments of troops. He fought in 76 military actions and was wounded three times. Barringer was captured by Union troops in April, 1865. While a prisoner, he met Abraham Lincoln, the president who would be assassinated just a few days later.

Barringer moved to Charlotte in 1865, after the war. He entered a law practice with James W. Osborne. Barringer helped establish the state's railroad systems, then ran unsuccessfully for governor in 1880. He retired in 1884 and wrote a book of military history. Gen. Rufus Barringer had three sons and was married three times; first to Eugenia Morrison, then to Rosalie Chunn, and lastly to Margaret Long.