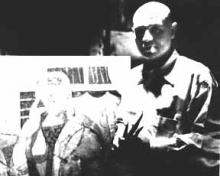 Although he only lived in Charlotte until age 5, artist Romare Bearden (1914-1988) is still identified with the city of his birth.

He grew up in New York. During World War II, he served with the all-black 372nd Infantry Regiment. It was in the 1960s that he rose to prominence for his controversial works of art that depicted the social issues and struggles important to black Americans.

Assembled from newspaper and magazine photographs, these large collages, which Bearden sometimes called projections, were colorful and powerful. His work was exhibited in 1971 at New York's prestigious Museum of Modern Art, and in 1980 at the Charlotte's Mint Museum of Art. He also co-authored several books about art. Few African-American artists have achieved such an international reputation.

A wall-sized mosaic by Romare Bearden, "Before Dawn," was installed in the Main branch of the Charlotte Mecklenburg Library in 1989.