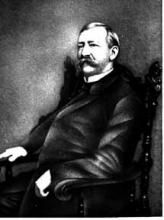 Well-liked as a newspaper writer and editor, J.P. Caldwell (1853-1911) was born near Statesville. He worked at the first newspaper in Iredell County before coming to Charlotte in 1872. He bought a Statesville newspaper, the Landmark, in 1880, but is best remembered for his partnership with industrialist D.A. Tompkins. In 1892 the two men formed a new publication from what had been known as the Charlotte Chronicle. It was the forerunner of today's Charlotte Observer. For all his prestige and respect in the community, Caldwell was not a highly educated man. The only degree he held was an honorary one from Erskine College in South Carolina. Caldwell edited the Charlotte Observer until 1909. He was married twice. His first wife was Maggie Spratt, a descendant of Mecklenburg patriot Thomas Polk. They had five children. After his first wife died, Caldwell married a fellow Observer writer, Adelaide Williams, and they had one child.