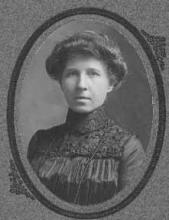 In an age when opportunities for women were extremely limited, Annie Lowrie Alexander made a place in history. She was the first woman in the South to practice medicine. She was born near Cornelius, N.C., the daughter of a prominent Mecklenburg citizen, Dr. John Brevard Alexander, and his wife, Ann Wall Lowrie. She graduated from the Women's Medical College in Philadelphia in 1884. She taught in Baltimore and received a medical license in 1885, having earned the highest grade in her class of 100 students.

In 1887 she returned to Charlotte. At the end of her first year as a physician in the Queen City, she earned the sum of two dollars. Dr. Alexander served on the staff of both St. Peter's Hospital and Presbyterian Hospital. She was president of the Mecklenburg Medical Society and worked to help numerous other civic institutions. She is buried in Charlotte's Elmwood Cemetery. (1864-1929)