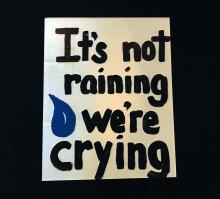 This digital exhibit represents the opinions and emotions surrounding March For Our Lives, Charlotte, on March 24, 2018. The Robinson-Spangler Carolina Room of the Charlotte Mecklenburg Library has digitally compiledsigns that were donated to it by March For Our Lives, Charlotte, participants. These signs were on display on the first floor of the library for two months after the event took place.

Images of 38 of these signs may be viewed in the Gallery at the bottom of this page.

It is the mission of the Robinson-Spangler Carolina Room to preserve historical materials. In recognition of the fact that history is being made every day, we collect recent artifacts that reflect on the community. This collection of signs, as well as the production of this digital exhibit, has been created to remember the event itself and to promote discussion of its importance in our city's history, its impact on Charlotte, and its impact on our nation.

On February 14, 2018, a shooter opened fire in Marjory Stoneman Douglas High School in Parkland, Florida, killing seventeen students and faculty members and injuring seventeen others. This shooting surpassed the Columbine High School massacre of April 20, 1999 and became the deadliest shooting at a high school in the history of the United States. In the days and weeks following, Stoneman Douglas students took to media platforms to speak out against the gun violence that had occurred within the walls of their school, and the gun violence that was occurring in the United States.

Four days after the deadly shooting, students from Stoneman Douglas announced that they would be “marching for their lives” on March 24, 2018. Organizers promised to keep the voices of students at the center of the movement by involving teens and future voters in the march and its planning. Stoneman Douglas Junior, Cameron Kasky, stated in an interview that, “One of the things that we've been hearing is that it’s not the time yet to talk about gun control. So here’s the time that we’re going to talk about gun control: March 24.” (Charlotte Observer, 3/26/2018)Ann Doss Helms and Lavendrick Smith, "“Fix this disgraceful issue!” Students lead big Charlotte rally against gun violence" Charlotte Observer, May 26, 2018 While planning for the march in Washington D.C. took place, 800 cities across the United States began to plan their own marches. Charlotte was among those cities.

On March 24, 2018, while people packed the streets of Washington, D.C, First Ward park in uptown Charlotte saw an estimated 2,500 people speaking out against gun violence and advocating for politicians to act. Students from Charlotte schools spoke out against the violence and voiced their own concerns and fears.

March For Our Lives events did not end in 2018 or with the large events held on March 24, 2018. Across the United States of America there are hundreds of chapters, and two within the city of Charlotte.

One of those cities is our own. On April 30th, 2019, a shooter opened fire in a classroom on the campus of the University of North Carolina at Charlotte. This shooter took the lives of two students, Riley Howell and Ellis "Reed" Parlier, and injured four students: Rami Al-Ramadhan, Sean DeHart, Drew Pescaro, and Emily Houpt. On May 3rd, the Charlotte community joined together to hold a March For Our Lives rally that took place both on campus and in Uptown Charlotte. The community and students wore green and white and called State and Federal Legislatures to respond to gun violence at the university and nationwide.

This digital exhibit represents the opinions and emotions surrounding March For Our Lives, Charlotte, on March 24, 2018.