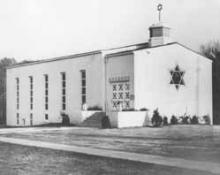 The modern, or reform, Jewish congregation separates from Temple Israel, which is more traditional. The new temple will be called Beth El. While many Charlotte Jews will distinguish themselves through civic and charitable work, no one will cause more controversy than Harry Golden. Although once a writer for the Charlotte Observer, Golden begins publishing his own paper, The Carolina Israelite, from his home in the Elizabeth neighborhood. He will win both national acclaim and disdain for his editorials against racial segregation.Temple Beth El