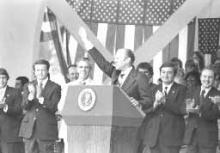 May 20, 1975 - President Gerald Ford draws a crowd estimated near 100,000 when he speaks at Charlotte's Freedom Park. He has come to help celebrate the 200th anniversary of the Mecklenburg Declaration of Independence. Long a topic of controversy, some believe the Meck Dec never existed. Others swear their ancestors witnessed or signed the document that proclaimed freedom from Britain in 1775. Ford Greets Crowd of Thousands at Freedom Park