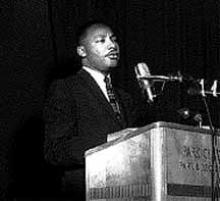 May 31, 1963 - A young, energetic black preacher named Martin Luther King, Jr. speaks in Charlotte to a gathering of six black high schools. Just 10 days earlier, Johnson C. Smith University students marched downtown to protest segregation, laws that separate people according to race. Black and white civic leaders responded to the protest by agreeing to have lunch together. Dr. King commends the solution that has begun to chip away at segregation in Charlotte's public places. His magnificent voice will fall silent less than five years later when he is murdered. Martin Luther King, Jr.