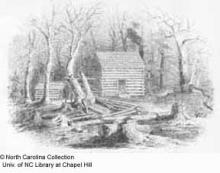 December 3, 1768 - Charlotte is chartered, which means the new town will have a courthouse and a prison. The law establishing a town for holding court in Mecklenburg County was first passed at a session of the colonial Assembly. It was then sent on to the governor, who made it effective on December 3 of that year. Here is the full text of the law from the State Records of North Carolina:

An Act for establishing a Town in Mecklenburg County.

II. Be it therefore Enacted, by the Governor, Council, and Assembly, and by the Authority of the same, That the said Three Hundred and Sixty Acres of Land, so laid off by the Commissioners or Trustees as aforesaid, be, and the same is hereby constituted, erected, and established, a Town and Town Common, and shall be called by the name of Charlotte.

III. And be it further Enacted, by the Authority aforesaid, That John Frohock, Abraham Alexander, Thomas Polk, Richard Berry, Esquires, and George Allen, and every of them be, and are hereby appointed Directors and Trustees for directing the Building and carrying on the said Town; and they shall stand seized of an indefeasible Estate, in Fee, in the said Three Hundred and Sixty Acres of Land, to and for the Uses, Intents and Purposes, hereby expressed and declared; and they or the Majority of them, shall have full Power and Authority to meet, as often as they shall think necessary, and cause an exact Plan of One Hundred Acres of the said Land to be made, as near as may be, agreeable to the Streets and lots already laid out, and the Residue thereof shall be, and remain for a Common thereto; and that the said Directors shall insert a Mark or Number on each Lot; which said Plan shall be kept in some convenient Place in the said Town, for the View of such Persons who have, or incline to have a Lot or Lots in the same.

IV. And whereas eighty Lots, already laid off in the said Town, have been Purchased; Be it therefore Enacted by the Authority aforesaid, That the said Directors, or the Majority of them, shall make and execute Deeds for granting and conveying the said Eighty Lots to the Purchasers, their Heirs and Assigns forever; and also to every other Person who shall purchase any other Lot or Lots in the said Town, at the Cost and Charges of the Grantee to whom the same shall be conveyed, he or they paying to the Treasurer hereinafter appointed, the annual Rent of One Shilling, for each and every Lot; and every Person claiming any Lot or Lots by Virtue of any such conveyance, shall and may hold the same in fee simple.

V. Provided nevertheless, That every Grantee of any Lot or Lots in the

said Town so conveyed, or hereafter to be conveyed, shall, within Three Years next after the Date of the Conveyance for the same, erect and build on each Lot so conveyed, one well framed sawed or hewed Log House, twenty Feet in length, and sixteen Feet wide, and Ten Feet high in the Clear, with a Brick or Stone Chimney or Chimnies, or proportionable to such Dimensions, if such Grantee shall have Two or more Lots in said Town; And if the Owner of any Lot shall not pursue and comply with the Directions in this Act Prescribed for building and finishing a House thereon, then such Lot upon which such House shall not be built and finished shall be revested in the said Directors; and they or the Majority of them, may, and are hereby impowered and authorized, to sell such Lot for the Best Price that can be had, to any Person applying for the same, in such Manner, and under such Restrictions, as they could or might have done if such Lot had not before been sold or granted; and the Money arising by such Sale to be applied as the Directors, or the Majority of them, shall think proper, for the Use of the Town.

VI. And be it further Enacted, by the Authority aforesaid, That Thomas Polk be, and is hereby appointed Treasurer of the said Town; who shall enter into Bond, with sufficient Security, to the Directors of the said Town, in the Penal Sum of Five Hundred Pounds, that he will well and truly account with and pay the Monies he shall receive in Virtue of his Office, to such Person or Persons as by this Act he is directed: And on the Death, or removal out of the County of the said Treasurer, the remaining Directors, or the Majority of them, by Certificate under their Hands and Seals, shall nominate and appoint one other of the said Directors to be Treasurer of the said Town; and so in like Manner, from Time to Time, as often as the said Office shall become vacant as aforesaid; and such Treasurer or Treasurers shall enter into Bond, with Security, in the same Manner as the Treasurer by this Act appointed.

VII. And be it further Enacted by the Authority aforesaid, That in Case of the death, Refusal to act, or Removal out of the County, of any of the said Directors, the surviving or other Directors, or the Majority of them, shall, and are hereby impowered, from Time to Time, by Instrument of Writing, under their respective Hands and Seals, to nominate some other Person, being an Inhabitant or Freeholder in said Town, in the Place of him so dying or refusing to Act, or removing out of the said County; which Director so nominated and appointed shall, from thenceforth, have the like Power and authority, in all things in the Matters herein contained, as if he had been expressed by Name and appointed by this Act.