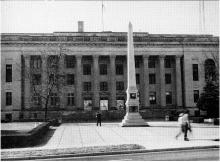 The Fifth Courthouse was located at 700 East Trade Street next to the new City Hall. . . . It was designed by noted architect Louis H. Asbury, a Charlotte native who also built the Myers Park United Methodist Church. . . . The Courthouse is an imposing, three-story, rectangular limestone building, topped with a recessed structure that served as the county's jail until the 1960's. from Courthouses of Mecklenburg County, 1766-2007 (Mecklenburg County, 2007)