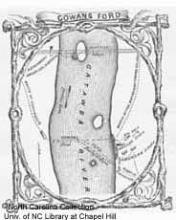 February 1, 1781 - British commander Cornwallis advances back into North Carolina as American General Nathanael Greene's army retreats. At a crossing place, or ford, on the Catawba River, the Battle of Cowan's Ford claims the life of beloved North Carolina militia commander General William Lee Davidson. In later years, a town, a county and a college will be named for Davidson.