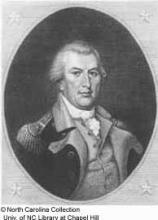 October 12, 1780 - The people of Charlotte and Mecklenburg County continue to vex General Cornwallis. Skirmishes such as the Battle of the Bees just nine days earlier have shown the British commander that a military victory won't be easily won. Cornwallis calls this place a Hornet's Nest of rebellion, and leaves.