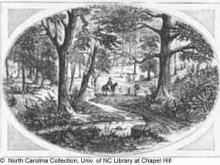 October 7, 1780 - On a long, low ridge to the west of Charlotte, frontiersmen from Georgia, Virginia, and both Carolinas are fighting a band of British militiamen led by Major Patrick Ferguson. Although they are evenly matched with about 900 men each, the determined Americans surround the British and trap them at the top of Kings Mountain. Twenty-eight Americans lose their lives and 68 suffer injuries, but they kill, wound or capture nearly all of the British troops in a stunning victory that helps bring about the end of the Revolutionary War.