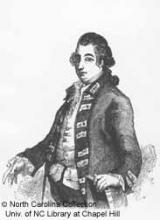 September 26, 1780 British commander Lord Charles Cornwallis and his Legion march into Charlotte expecting to be greeted by loyal followers of the Crown. Instead, he is met by Major William Davie and a band of 150 soldiers who are hiding around the courthouse on East Trade Street. Although the “Battle at Mecklenburg Courthouse” ends quickly as the rebels disperse, it sets the stage for Cornwallis’ short and disappointing stay in Mecklenburg County.(Pancake, John S. This Destructive War: The British Campaign in the Carolinas, 1780-1782, p.116.)