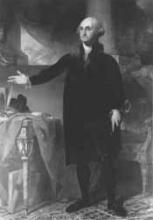 December 19, 1777 - Twelve thousand troops under the command of George Washington begin a brutal winter encampment at Valley Forge, Pennsylvania. Mecklenburg's William Lee Davidson is one of the soldiers who helps protect the American Congress, in session nearby, from British attack. But there is a terrible price to pay. Lacking food, shelter and clothing during the harsh winter, many soldiers will freeze or die of starvation.