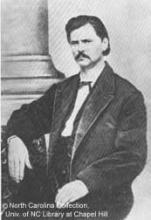 Zebulon Vance, who was sent to prison at the end of the Civil War, is elected North Carolina's governor. When Jewish shopkeeper Samuel Wittkowsky learned of the order to arrest Vance, he convinced the officers that his friend was honorable and would not flee. Now Vance lives in Charlotte. He has served as governor during war and in peacetime. Soon, Vance will be elected to the U.S. Senate.