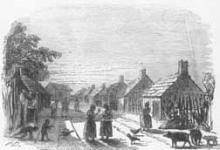 Plantation owners fear their slaves may plan to run away or revolt. To prevent this, slaves are forbidden to meet in groups or learn to read. They live in huts and cabins where the supervisors, or overseers, can watch them. Often, husbands and wives are separated. But the slaves gather in secret to worship, study and sing hymns. One is called Steal Away, and some slaves believe the words are a sacred message telling them to seek freedom.A street through slave quarters