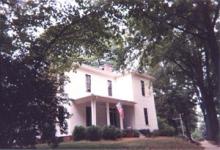 World War I began in Europe in 1914. When America joined the fight on April 6, 1917, there was a need to mobilize troops quickly. Charlotte, after much deliberation, was chosen to get a camp on July 13, 1917. The military selected the southwest part of the county as the most suitable location, and work to build a camp began almost immediately. Since most of the area chosen was very rural, there were very few existing buildings for the government to use.

The James C. Dowd home, built in 1879, was chosen as the temporary headquarters, partly because of its high elevation, which would provide a nice view of the camp. Additions were built on the house for the many offices that were needed. Later, the headquarters was moved to another nearby home, but the Dowd house remained the office for construction.

The home was sold after the war and returned to civilian use. The Cook family, who owned the house for the next fifty years, added a heating system, electricity and bathrooms. A basement was dug by hand, and the many additional offices were demolished. Property around the house was sold off, and the lot became comparable to other homes in the neighborhood.

The Historic Landmarks Commission of Mecklenburg County has posted a historic survey and research report for the house to its website. The report, completed in 1978, does not show that the house became the property of the Mecklenburg County Park and Recreation Department in 1989.

The home looks very different today from the original Dowd farmhouse or the later headquarters of Camp Greene.

Many changes were made to accommodate the U.S. Army and the families who have resided here. Today it stands as it was originally in 1879, although the doors and mantles have been replaced downstairs. What once was a farmhouse on 248 acres of orchards, cotton fields and a creek is now a house with historic designation in a city neighborhood. It is surrounded today by homes, Christ Presbyterian Church, businesses and Charlotte Fire Department Station #10.

A $50,000 grant proposed by Joe Graham Foster and awarded by the North Carolina Legislature about 1985 enabled the house to be remodeled and refurbished with period pieces, exhibit cases, light fixtures and a security system.