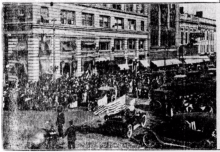 When the armistice was signed on the 11th hour of the 11th day of the 11th month in 1918, the world was reeling from the effects of a long war as well as a major flu epidemic. Charlotte celebrated the end of the war with a large, downtown parade, which included cars, trucks, trolleys and thousands of people waving flags and making noise. Throngs of people from every walk of life attended this parade to express their enthusiasm. According to The Charlotte Observer, no serious accidents were reported, but a few received minor injuries as the streets turned "topsy-turvy" overnight.

A Time to Celebrate!

This postcard expresses the joy and excitement of a father to his daughter, Miss Burgess, who attended Winthrop College in Rock Hill, South Carolina. "Camp Greene, N.C. 11/12/1918, YMCA # 109: "Praise God from whom all blessings flow." Nov. 11th, 1918 A World Holiday!" The Armistice postcard showed the Alexander house, used as a divisional headquarters at Camp Greene.

It would take a long time for the soldiers to come home and life to return to normal. Mecklenburg County lost approximately 106 military men during the war. Many returning soldiers suffered from the lasting physical problems from injuries and exposure to poison gas used on the battlefields. Others died from the results of the Spanish influenza while waiting to return home.

Women, who had been helping out on their farms and in industry, returned to their more traditional roles. Women would still not win the right to vote nationally until the ratification of the 19th Amendment to the U. S. Constitution on August 26, 1920, almost two years after the end of the war.

Many soldiers who came from far away places trained at Camp Greene, met Mecklenburg women, and after the war, returned to make them their brides. Jack Jones of Wyoming, who married Miss Bleecker Matthews of Charlotte, is just one example.

Herbert H. Baxter, a native of Boston and a graduate of the University of Massachusetts, trained at Camp Greene and served in France. He also returned to Charlotte after the war and started a business. He married a local woman, Virginia Littlejohn and they had three daughters. Baxter was involved in the North Carolina Civil Air Patrol, the Boy Scouts and the American Legion. He served on the Charlotte City Council from 1935 - 1939 and 1951 - 1959 and as Charlotte's mayor from 1943 - 1949.

Not since the days of Reconstruction, when speculators from all over the country came south, had there ever been such a multi-cultural group in Mecklenburg County. Four hundred aliens alone became American citizens on October 19, 1918 at Camp Greene! Many local businessmen who had stocked their stores for the wide variety of needs and tastes were not prepared for the sudden end of the war and the loss of so much revenue.

Many soldiers had not finished their education before the war started. The YMCA in Charlotte offered night classes to the male public, but ex-soldiers could enroll for free. The soldiers of World War I did not have the benefits of training and education the "G. I. Bill" made available to veterans of World War II.

Men began returning to the cities, farms and mills in the area. Highland Park Mill No. 3 had sent forty or more men into the service and had lost two of them. Others came back injured or were still missing at the end of the war. There were adjustments to make in most occupations, jobs and relationships.

Camp Greene, the largest employer at that time in the county, closed up quickly. The Headquarter Company of the Fourth Division Recruit Camp celebrated with a farewell dinner on December 19, 1918. A menu for the Farewell Dinner was donated to the Carolina Room by Tom Burgess.

The military lost many of their soldiers to the flu epidemic. Bodies of soldiers were stacked up waiting for burial or transportation to other parts of the country. Many materials were salvaged, and some buildings were just vacated. Some residents of Mecklenburg county remember their fathers going to the area occupied by Camp Greene and getting materials more than twenty years later for the scrap metal drives in Charlotte during World War II.

By February 1919, an executive with the YMCA came to Camp Greene to assume charge of the sale or salvage of the dozen or more "Y" buildings at the camp. One hut, #106, had many copies of famous paintings curated by Brevard Nixon. The paintings were given to the Methodist mission on Brevard and 14th Streets.

Another "Y" hut had pictures of movie stars, photographs of regiments trained at Camp Greene and scenes from the battlefields. All buildings and furnishings were to be removed by March 15, 1919. Over a hundred "Y" secretaries, who once provided entertainment, recreation and other services for the 63,000 soldiers stationed at Camp Greene, were sent home or moved to other camps.

Places that had once been home to thousands of soldiers soon returned to fields and vacant buildings. Other buildings were torn down during the building or expansion of roads and shopping area in west Charlotte during the 1970s. Few buildings from Camp Greene are known to exist today.

The Daughters of the American Revolution erected a monument to the soldiers who served at Camp Greene. The environment around the monument looks much different today than the barren area in this picture. The monument is surrounded by a wrought iron fence and is located on the northeast corner of Wilkinson Boulevard and Monument Street in Charlotte, which are two of Charlotte’s thoroughfares.

The local chapter of the War Mothers asked that the city designate a section of Elmwood Cemetery to those soldiers who died at Camp Greene and whose families had not claimed their bodies. The city agreed, and the soldiers were buried in Section DX 008.

The Doughboy monument was originally placed on the old courthouse grounds. The work is entitled "Spirit of the American Doughboy" by E. M. Viquesney, a sculptor from Americus, Georgia. It now sits on the lawn on the northeast corner of Trade and Davidson Streets.

Once the war was over, Congress passed unprecedented legislation to allow mothers and widows of the soldiers to visit the graves of their sons and husbands. Several women in Mecklenburg County took advantage of this opportunity.

Those women who responded “yes” meant they wanted to make the trip to Europe in 1930. The mother who responded “no” had no desire to go in any year. Those listed with a question mark indicate that they had not stated their preference by the time the government printed in the list of those eligible to make the pilgrimage in 1930.

For more information about these historic visit, you may visit the website of the US Army Quartermaster Museum.

The American Legion sponsored a Paris Convention from September 19-24, 1927. The members and their families traveled to Europe on the S. S. Pennland, a ship that was part of the Red Star Line. It sailed from New York on September 7, 1927 and from New Port News, Virginia on September 8, 1927. It arrived in Antwerp, Belgium.

See a list of those attending the convention from Mecklenburg County.

Within twenty-three years, Mecklenburgers would again take up arms to defend democracy in the world. What was called the "Great War" and "the war that would end all wars" would seem small by comparison to World War II in the loss of life, number of soldiers needed to serve their country and the length and scope of the war. Nevertheless, these soldiers and sailors who left Mecklenburg to fight for freedom served their country with new types of warfare in places far from home and helped win the war!