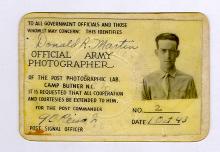 Martin began work in 1945 at the Tom Franklin Studio on W. 4th Street, next door to the offices of the old Charlotte News, at 4th and Church Streets. The Franklin Studio staff served as photographers for the News, which was Charlotte's afternoon paper for almost a century until 1985.

Don Martin photographed every president from Truman to Reagan. He joined the Carolinas Press Photographers Association and rose to be an officer in it. In 1966, he won a J.C. Penney - University of Missouri Journalism award for press photography.

Don Martin died on March 31, 1999. His widow kept many black and white photographs of his, and after her death in 2012, they were donated to the Robinson-Spangler Carolina Room. These include personal as well as commercial shots and a trove of images from the World War II era as well. With thanks to Martin's neighbor, Paula Onxley, we have chosen a sampling of the wartime images to make this exhibit from the collection.

Martin began work in 1945 at the Tom Franklin Studio on W." data-share-imageurl="">