Home » Exhibits » Charlotte's Legacy: The Changing Faces of a City 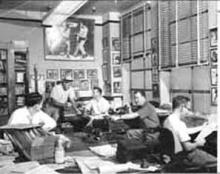 The Charlotte Observer began in 1886 when the Charlotte Chronicle started selling papers. In 1892, D.A. Tompkins and Joseph Pearson Caldwell purchased the Chronicle and renamed the paper the Daily Observer. Today, the Charlotte Observer is one of the leading sources of news in the south. Over the years, its staff of talented writers has received numerous awards for their achievements. The photograph below captures the legendary sports staff of the 1940s and 1950s, from left-to-right: Herman Helms, Sam Miller, Dick Pierce, Wilton Garrison and Richard Morris.