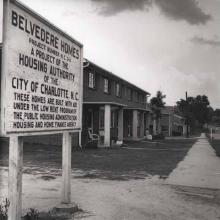 Early projects were intended to replace substandard housing for both whites and blacks. Occupants were required to be “natural or cohesive American families.”

Structures alone cannot create a community. Grassroots efforts by residents are also necessary. “Taking Back Our Neighborhoods Carolina Crime Solutions” is an attempt to fight crime with a multitude of resources and a mix of “residents, government and charities.” In addition, youth involvement is a key part of community revitalization and a primary motivation for such efforts.