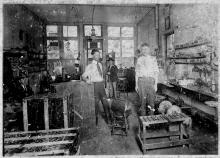 Verdie Lee Perrell was born in Guilford County, North Carolina in 1902. He was affiliated with The Gallagher Commercial Studio from 1922-1925. From there he partnered with W. Marvin Dunaway and formed Dunaway and Perrell Detective Agency and Commpercial Photography in 1926. One year later, Perrell was the sole propietor of the studio from 1927 to 1930. The Studio disappears after then and Perrell worked with Charlotte Engraving from 1930 to 1937 and later Whitsett Photo Company from 1938 to 1942. During World War II, Perrell worked as a defense worker. (1) He died in Baltimore, Maryland on 21 September 1970. (2)

Verdie Perrell is the young man in the middle with the white shirt and tie.

Party in Charlotte circa 1920s.

To learn more about early Charlotte photographers and examples of their works, click on the tags below.