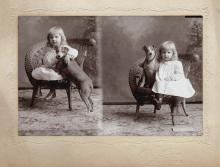 By 1903, the Charlotte City directory lists six photographers, including Otis Johnson Rader, who was professionally known as O. J. Rader (1869-1935) and his wife Sarah "Sallie", Charlotte’s first professional woman photographer. (1)  A native of Caldwell County, North Carolina, Otis was the son of Pinkie Rader and Laura Johnson. (2)  Sarah Deal Rader was born on September 16, 1872 in Newton, North Carolina. She was the daughter of Hosea and Arrina Deal. (3)

The couple first worked in Chester, South Carolina before coming to Charlotte. According to Sarah’s obituary, they came to Charlotte in 1895; however they did not close the Chester gallery until March of 1898, and their names do not appear in the city directory until 1903. (4) The Rader’s first studio was on 1 West Fifth Street, where the Ivey’s building now stands. In 1913, the couple renamed their business Rembrandt Studio, which was the first Charlotte business to display electrical signs.  It was originally located at 127 ½ North Tryon Street. After Otis’ death in 1935, Sarah "Sallie" continued to run the studio. In 1938, she moved the studio to 139 West Fourth Street. (Hill’s Charlotte, North Carolina City Directory, 1938 p. 548.) In 1944, Sarah Rader sold the studio to Elizabeth Brumfield, who was a popular Charlotte photographer for a number of years. Sarah Rader died on August 8, 1948. (5)

Above is Mary Brevard Alexander posing with her pet dog in this stereotype. The latter.  first appeared in the United States around 1850. Technically, it is a pair of photographic prints of the same person or place that are mounted next to each other on a 3½ x 7 card. Viewed through a stereoscope the two-dimensional scene becomes a single three-dimensional photograph. Viewing stereographs remained popular until about 1920.

The men in this albumen print areJoe Davidson (left) and Graham Abernathy (right) are dressed in costumes for a 1901 jousting tournament. This was a popular event at The Rural Hill Plantation for a number of years.

The couple first worked in Chester, South Carolina before coming to Charlotte." data-share-imageurl="">