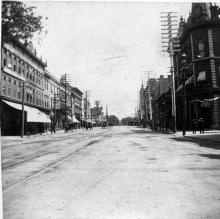 Baumgarten’s sole competitor for a number of years was James H. Van Ness. He was born in Baltimore, Maryland on March 17, 1841. Educated at a private school, Waugh and Majors, Van Ness graduated in 1858, and began working at his father’s grocery store until 1862. At that time, Van Ness joined the Confederate Army and served with the 15th Virginia Cavalry. From all accounts, he was engaged in numerous battles and skirmishes where he performed bravely. (1)

Following the war, Van Ness settled in Lynchburg, Virginia where he learned the art and trade of photography. By 1867, he was living in Winnsboro, South Carolina where he married Martha J. Rosborough. According to Van Ness’ obituary, the couple moved to Charlotte in 1871. By 1880, the Van Nesses were living in the prestigious Fourth Ward neighborhood. The earliest, extant, Charlotte City Directory indicates that Van Ness was working in the city as a photographer by 1875 at 21 North Tryon Street. (2)  Van Ness, like Baumgarten, was civic minded. He was elected to the Board of Alderman in 1880. It was during this time that the board made considerable improvements to city life in Charlotte by approving funding for city water works and public schools. (3)