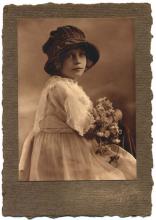 Alton Wells Franklin was born in Chesterfield, Virginia in 1878.  While living in Petersburg, Virginia, he met and married his first wife, Claudia B. Willis. Around 1908, Franklin became an itinerant partner with a Mr. Hicks, who is listed in the 1909 Charlotte City directory, and their studio was located at 1 West Fifth Street. (1) According to the 1920 city directory and the census, he employed Inez or Meg Flowers as an artist in his studio. The young woman boarded with Franklin and his wife, Claudia, in their home at 302 North Tryon Street. (2)

From 1923 to 1924, Franklin ran the Iris Studio at 12 ½ South Tryon Street. (3 ) However, according to the 1926 city directory, Claudia Franklin, his wife was running the Franklin Photography studio from their home at 302 North Tryon Street. (4 )  By 1930, Franklin had remarried. He and his wife Dorothy Grant Franklin and their daughter Shirley were living on Morehead Street.  Franklin was still working as a photographer. (5) According to the 1935 Charlotte City Directory, the Franklins were living on Lexington Avenue, but his studio was no longer listed. (6 ) The last time Franklin appears in Charlotte is in 1937, and he took on a new career as a traveling salesman. (7 ) Alton Wells Franklin died in either 1943 or 1945 in Miami, Florida.

To see other photographs, click on the tag below, "Charlotte Photgraphers."