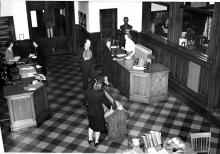 The first year after the library's reopening the county appropriation was set at 3 cents per $100 valuation. This gave the library an income of $38,000, a 26% increase over the budget in the year before it had closed. But the funds were still far short of the American Library Association standard for a library serving a city the size of Charlotte.

The library was no longer books alone. The emphasis was on providing information to people in a wide range of formats. One new service, begun within weeks of the library's reopening, was the Business Information Service. This service was suggested by one of the library board members, James R. Bryant, who saw the need for timely statistical and financial information among downtown businessmen.

With the outbreak of World War II the library established a War Information Center to serve as a clearinghouse for information regarding the many war-time agencies in the city. The center was staffed by volunteers working under the Civilian Service Corps. To accommodate the servicemen who came to Charlotte for the weekends, the library began remaining open Saturdays until midnight and on Sunday afternoons.

In April 1942, the library began offering educational films. At first the collection was made up mostly of free films available from agencies such as the Red Cross or the Civilian Defense. But soon the library began buying films to meet a growing demand. By 1944, over two hundred films were being loaned each month along with two projectors, one for silent films and one for the talkies. This film service evolved into the library's Film and Sound Division. It was one of the first programs of its type and serves a national model.

The library's Film and Sound Service was one of the first in the nation. In order to provide for the growing work of the Film and Sound Division, some changes had to be made in the main library's office space which, by 1946, was severely limited. Additional workspace was created in the building's auditorium which meant there was no longer a place in the library for programs. The library board had been concerned for some time with the need for space. In 1938, the board had asked the director to obtain plans for a new facility. A survey of the library, conducted in 1944 by the American Library Association, recommended increased income, new buildings for the main library and the branches and a name change - to the Public Library of Charlotte and Mecklenburg County. The name change was approved by the N.C. General Assembly in 1945. But the other recommendations were more difficult to achieve. An election was held in April 1946 on $600,000 in bonds for new library buildings, but the measure failed by a small margin.

In 1947 the General Assembly authorized an election in Mecklenburg County for Alcoholic Beverage Control stores with the stipulation that 5% of the profits would go to the public library. This measure did pass, and the library began receiving ABC funds in October 1948. With the income the library was able to buy two bookmobiles and expand services in the county. Most of the former book stations in homes and stores were closed and instead became bookmobile stops. The main library and Brevard Street Branch were redecorated with new and refinished furniture, and fluorescent lights were installed in both buildings.