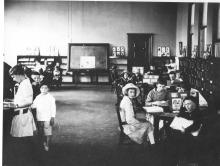 Lack of space for both books and programs also was a serious problem. In 1915, Andrew Carnegie was approached again for funding. His $15,000 gift was used to build an annex at the rear of the original building. The annex housed a separate Children's Department of about 1,200 square feet and, in the lower level, a meeting room with a small stage where the Little Theater of Charlotte first performed.

Already operating at the limits of its resources, the library was soon faced with new pressures. With the coming of World War I more than 50,000 soldiers arrived in Charlotte for army training at Camp Greene on the western outskirts of town. In her 1917 annual report to the library board, Miss Palmer described the library's war work: When the soldiers came to Camp Greene, night opening of the library was re-established, and all library privileges extended to men in uniform and their families. The reading rooms have frequently been crowded with soldiers, especially on Sunday afternoons, and inquiries have come from civilians who wished to know if those rooms were for the exclusive use of the men from Camp Greene.

The library started a collection of materials on the causes and background of the war and offered books on meatless cooking and food conservation.

The children's librarian, Anne Pierce, was promoted to head librarian when Miss Palmer resigned in 1918. With her interest in service to children, she welcomed an agreement in 1919 between the library board and the city board of education that made the city school libraries branches of the public library. Soon after, the county schools were also included. The relationship was to last well into the 1930s with the public library continuing to catalog the school systems' books for several years after that. Finally, the library had successfully established service beyond the city limits. Later, however, with the growth of the schools, the arrangement would prove to be a burden. The large numbers of school library books to be cataloged drained the public library of resources.

By 1925 the financial situation had improved. Increases in the city appropriation had brought the annual income up to $19,800, and the library entered a period of rapid growth and expansion. During the first three decades of its history the library had struggled to become firmly established in the community. Then came the 1920s, boom time for the library, just as it was for the city. Charlotte had grown to 80,000 by 1920. No longer a town, Charlotte was now a city with progressive ideas and ambitions. Unfortunately, both the library and the city were overextended and vulnerable at the onset of the Great Depression.