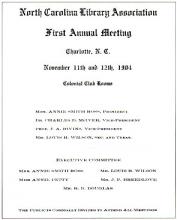 Annie Smith Ross, the first librarian at the Carnegie Library, had gone to Atlanta after the death of her first husband to study library work. She brought back many advanced ideas. She believed in the positive influence of books and the library in the community, setting up a separate area in the library for the use of children - a very modern idea in the early 1900s. She helped organize and served as the first president of the North Carolina Library Association bringing its first conference to Charlotte in 1904.

Under Mrs. Ross's leadership the use of the library grew slowly, but steadily. In the library's first five years the book collection increased to 5,350 books, mostly donated, while circulation more than tripled. The budget, however, remained the same - the annual $2,500 that the Carnegie gift had stipulated. Four times, in 1907, 1909, 1911 and 1913 the North Carolina General Assembly authorized referendums for an increase in the tax for the library. But each time the vote either was not held, because of technicalities, or failed. It was an unsettled time in Charlotte politics, as city government grappled with Charlotte's rapid industrial growth and booming population.

Under Mary B. Palmer, librarian from 1910 to 1918, funding problems continued. In her first annual report to the library board, she wrote: "We are bound hand and foot by lack of funds, and no step forward can be made until our shackles are broken. The board of directors approached the County Board of Education for help in 1911. The schools agreed to appropriate $300 if the library would allow all Mecklenburg County residents free use of its books. The library board agreed. This first attempt at countywide service continued for four years. By 1914, however, it had become obvious that the funding was inadequate to support the service, and the partnership was ended.